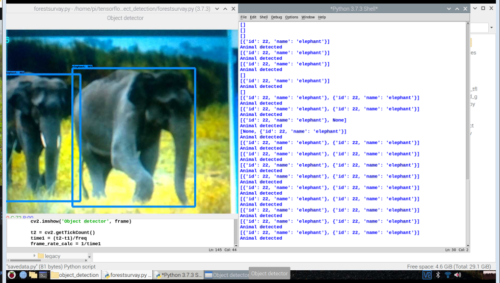 Continuous hunting as driven a lot of animal species to extinction and the Government has brought about little change apart from introducing a few laws and conducting a few surveys. But conducting surveys is an exceptionally difficult task, especially without the help of technology. To remedy this, we are going to make a prototype smart camera that can help us in the monitoring and surveillance of forests. Our smart camera uses a python-based code that consists of pre-trained TensorFlow models.The pre-trained tensor models help us in matching and mapping the image in frame with the model’s trained data to detect the image in the frame.

We have used a Raspberry Pi with a camera module. The Raspberry Pi gets the video using the camera, then using the OpenCV module it cuts the video in frames. Next, using OpenCV and  other modules it process the image detection of the species in the image and it tries to map it with a category and pre-trained detection model. It then shows the result of the detected species. If the detected species in the image is not available in category list then it gives the output as {none} and save that image with data and timestamp in database folder so that it can later be studied. If the detected species is available in the category list, it gives the output with name and ID of detected species and saves that data in text format with date and time in a text file named survaydb.txt and at the same time saves the image with detected named label the database folder for reference. So, in this way, our smart camera keeps track and creates a database with pictures of all species present in the forest. It can also be helpful in studying animal behaviour and can help us in studying the growth and flow of flora and fauna in the forest.

So let’s start our project by shopping for the required components.

Assuming that you have your RPi ready with Raspbian OS and Python IDE and have access to the RPI desktop either by VNC or by HDMI based display. So we are going to start with the installation of modules and library for our project. First, open the linux terminal on your Raspberry Pi. Then install the required using the following syntax

NOTE:- We are using Python3 Environment and code is compatible with python 3 and above version only.

After the installation you can now proceed with the cloning of TF modules, examples, and files using the following command:

The first part of the code consists of the required library and modules. Next, we have to set the path level text file that consists of the category names of species/objects we want to make it detect. Here we have set the category level file as New.pbtx. The next part of the code is for object/species detection and then we have the code that stores the output of detection result in a string variable called “name”. Then we have the code that allots the image name with detection date and time.

Next, we have a conditional statement that checks the output result of detection and if the condition of the result of detection is not “[]” then it saves the result with date and time in a text file with detection date and time. The next part of the code saves the detected image in the database folder. Here you can change the path for image storage as per your choice. (Refer the Fig 2,3,4)

Now save the code. Next, go to the data folder and create a file named New.pbtxt file and the category of animal/species name for detection and then save that. ( Refer Fig 5,6)

After finishing all the above parts, connect the camera module in Raspberry Pi camera port using a ribbon cable (Refer Fig 7). Next, open the code in Python IDLE and run the script and wait for few minutes so that it can load all the tensor flow modules. This will open a new window with the camera video output. Bring the camera in front of any animal such as a cow, sheep etc. Whenever an animal appears in the camera frame it will get detected and the results will be saved in a text file, and it will save that frame image in the database folder with date and timestamp. (Refer Fig 8).