Thanks to a new design approach, soft and flexible robotic parts can be built at much less cost and time compared to robots that have rigid structures. 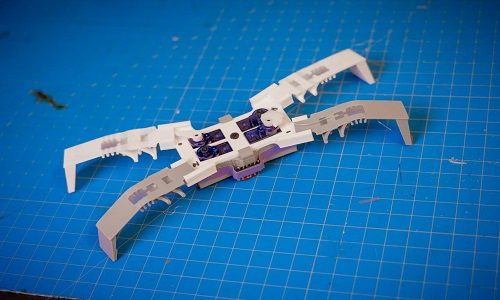 Soft robots are a unique innovation in the field of robotics. These machines are inspired by insect movements and possess a soft structure (again inspired by the soft exoskeleton of an insect). Soft robots often find applications in areas where stiff, solid-bodied robots are difficult to implement, such as bio-medical (prosthetics, surgery) and warehouse (handling of delicate objects).

Named as “flexoskeletons” (flexible exoskeletons), the soft robots are made from 3D printed rigid materials on a thin polycarbonate sheet that acts as a flexible base. This method combines softness and rigidity for movement and support. With the structure in place, Lego-liked different electronic components can be attached and detached for the robot to work.

“We hope that these flexoskeletons will lead to the creation of a new class of soft, bioinspired robots,” said Nick Gravish, a mechanical engineering professor at the Jacobs School of Engineering at UC San Diego. “We want to make soft robots easier to build for researchers all over the world.”

Besides being low-cost and simple to construct, the 3D printing of the soft parts takes just 10 minutes. The soft robot can be completely built under 2 hours.

The research team’s goal is to establish a process that is able to print the entire flexoskeleton robots without requiring any assembly by hand. It is hoped that a large group of these small robots would be capable of carrying out work as much as or perhaps even more than a single, solid-bodied robot can do on its own.