Although suitable to some extent, batteries required to operate robots have certain flaws. A unique electrolysis involving metal and air can overcome that. 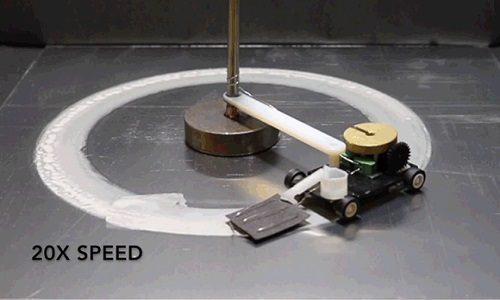 Automated machines or robots have several advantages: they are robust, can do monotonous tasks, are more efficient in completing work within time, can access hard-to-reach places and many more. Out of all these, the most striking is the fact that unlike humans, robots can continuously go on without feeling tired.

They get the power to carry on with the help of power sources such as batteries and harvesters. Both provide a steady supply of energy. However, they have disadvantages. Batteries are heavy and have a limited supply, which can run out after prolonged use. Harvesters, such as solar panels, don’t have to face such an issue but can only operate under certain conditions (solar panels need sunlight to operate). They also can’t convert that energy into electricity quickly.

So to solve this problem, a unique power solution has been devised by the research team at the School of Engineering and Applied Sciences, University of Pennsylvania. Called the “metal-air scavenger”, the system works both like a battery and a harvester. It provides power by repeatedly breaking and forming a series of chemical bonds along the interface of metal and surrounding air (similar to the electrolysis process in a battery). And by harvesting this energy from the surrounding environment to provide power makes it work like a harvester.

That means chips can provide more computing power in smaller and lighter packages. But when batteries get smaller, the density of chemical bonds in a material becomes fixed; smaller batteries mean fewer bonds to break.

“This inverted relationship between computing performance and energy storage makes it very difficult for small-scale devices and robots to operate for long periods of time,” said James Pikul, assistant professor in the Department of Mechanical Engineering and Applied Mechanics. “There are robots the size of insects, but they can only operate for a minute before their battery runs out of energy.”

If having a bigger battery seems to be the logical response, like that used by a harvester, then you are wrong.

“Harvesters, like those that collect solar, thermal or vibrational energy, are getting better,” adds Pikul. “They’re often used to power sensors and electronics that are off the grid and where you might not have anyone around to swap out batteries. The problem is that they have low power density, meaning they can’t take energy out of the environment as fast as a battery can deliver it.”

The metal-air scavenger (MAS) has a cathode that’s connected to the device it’s powering. Beneath the cathode is a slab of hydrogel and a spongy network of polymer chains that conducts electron transfer between the metal surface and the cathode via the water molecules it carries. With the hydrogel acting as an electrolyte, any metal surface it touches functions as an anode, allowing electrons to flow to the cathode and power the connected device.

To bring it all together, the researchers attached a small motorised vehicle to the MAS. By dragging the hydrogel behind it, the MAS oxidised metallic surfaces it went over. The result was a power source that was 10 times more power density than any energy harvester and 13 times more energy density than lithium-ion batteries.

“Energy density is the ratio of available energy to the weight that has to be carried,” Pikul says. “The MAS has 13 times the energy density of a lithium-ion battery because the vehicle only has to carry the hydrogel and cathode and not the metal or oxygen which provide the energy.”

It is to be noted here that this oxidation reaction takes place only within 100 microns of the surface. As there’s little risk of any significant damage occurring to the metal, the chemical bonds for electron transfer will always be available.

“In the near term, we see our MAS powering internet-of-things technologies,” Pikul says. “But what was compelling to us and the motivation behind this work, is how it changes the way we think about designing robots.”

It is anticipated that in the long term, this type of energy source would enable machines to keep themselves powered for longer durations under any circumstances.