A new research proposes that graphene can be used to design sensitive and self-powering temperature sensors like thermocouples for nanodevices. 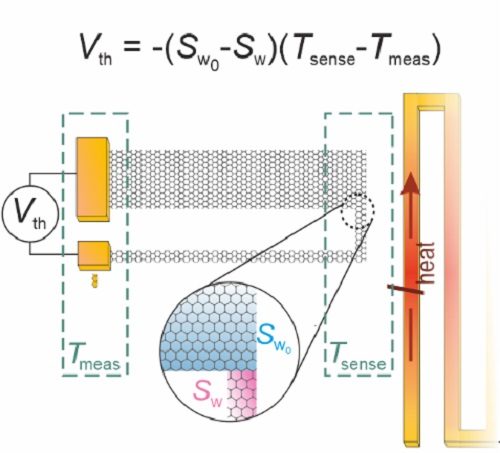 Reliable on-chip temperature sensors are a key component of small and portable devices. With increasing processing speeds, the amount of workload a system can handle is also subsequently increasing. This calls for effective thermal management in CPUs. Besides providing sufficient cooling to prevent hot spots, proper thermal management can also enable longer device lifetime as well as save energy. Such temperature sensors should have a small footprint, high accuracy and consume a minimum amount of power.

Several efforts have been made in the past to include thermocouples for on-chip thermometry. However, these thermocouples have a small sensitivity (of the order of 1 μV/K) and a relative thickness of 100 nanometers. This poses a challenge for implementation in nanodevices.

To overcome this challenge, a team of researchers from the University of Oxford, Delft University and IBM Zurich has demonstrated that graphene can be a suitable alternative for developing sensitive, single-material and self-powering temperature sensors.

In order to achieve this, a piece of graphene, consisting of a thick sheet of carbon atoms, was modelled into a U-shape with one wide and one narrow leg to form a single material thermocouple. By leveraging the effect of electron scattering (for voltage generation) at the edges of the graphene and carefully configuring the graphene legs to determine the potential difference, it was found that the graphene thermocouples increase in sensitivity with a decrease in leg width. This resulted in a maximum voltage-temperature sensitivity of ΔS≈39 μV/K.

Since graphene is relatively much thicker in size, it can be implemented as an on-chip temperature sensor in wearable devices for on-the-go body temperature measurement.

The breakthrough could pave the way for designing highly sensitive thermocouples and future graphene-based circuits. In addition, due to graphene’s bioinert nature and it’s stability in a variety of circumstances, these thermocouples could also be used as temperature sensors in harsh or sensitive environments. This strengthens scientists’ claim of graphene revolutionising semiconductor-based electronics.