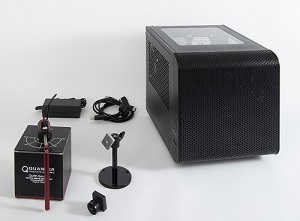 congatec, a developer of embedded computing technology has presented its brand new workload consolidation kit for vision based situational awareness, qualified by Intel as Intel IoT RFP (Ready For Production) Kit. The kit has been designed in cooperation with Intel and Real-Time Systems for next generation of vision-based collaborative robotics, automation controls and autonomous vehicles that have to tackle multiple tasks in parallel, including situational awareness that utilise deep learning-based AI algorithms.

Based on a COM Express Type 6 module equipped with Intel Xeon E2 processor, a Basler vision camera and an Intel Arria 10 FPGA card, the RFP kit has three virtual machines (VMs) built on Real-Time Systems’ hypervisor technology for workload consolidation in vision applications. One VM runs a vision based AI application (video analysis) on the basis of Intel OpenVino software for situational awareness, the second real-time VM is capable of running a deterministic control software and the third VM operates an IIoT/Industry 4.0 gateway.

The Real-Time Systems-based virtual machines can consolidate the different tasks on a single edge computing platform, thus saving costs. The Intel OpenVino software provides relevant artificial intelligence for situational awareness. OEMs just need to load their control to the real-time VM and they are ready to enrich their real-time control with data from the situational awareness VM and communicate in real-time with IIoT/Industry 4.0 counterparts to enable tactile internet controls.