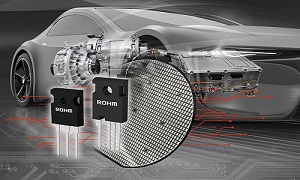 In recent years, an increase in next-generation electric vehicles (xEVs) has accelerated the development of smaller, lighter and more efficient electrical systems. However, improving the efficiency while decreasing the size of the main inverter in the drive system was challenging as it required further advancements in power devices.

With the capacity of the onboard battery increasing to improve the cruising range of EVs, the demand for shorter charging times is increasing as well. To meet this, designers need SiC power devices capable of providing high withstand voltage with low losses. For power semiconductors, there is often a trade-off relationship between lower ON resistance and short-circuit withstand time, which is required to strike a balance for achieving lower power losses in SiC MOSFETs.

ROHM’s new SiC MOSFETs are capable of delivering low ON resistance with high-speed switching performance, contributing to greater miniaturisation and lower power consumption in a variety of applications, including automotive traction inverters and switching power supplies.

A 40 per cent reduction in ON resistance can be achieved as compared to conventional products without sacrificing short-circuit withstand time by further improving its original double trench structure.

Lower ON resistances and larger currents tend to increase the various parasitic capacitances in MOSFETs, which can inhibit the inherent high-speed switching characteristics of SiC.

Bare chip samples have been made available from June 2020, with discrete packages to be offered in the future.