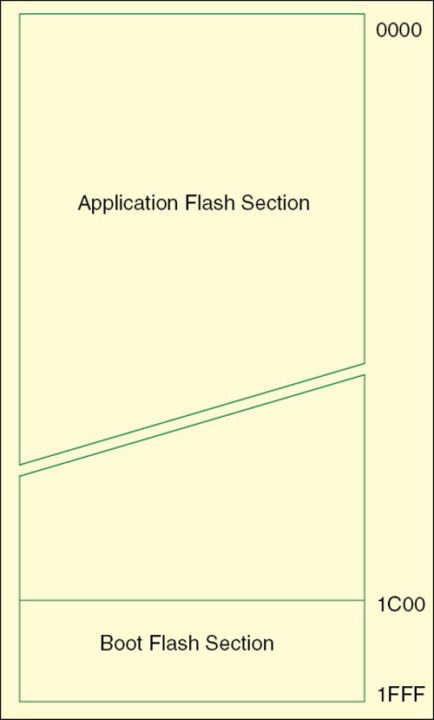 Once the programming process is complete, newly loaded code can be executed by pressing reset. Once the code is loaded on the microcontroller, UART is free and can be used for other applications.

Note that the bootloader gets invoked only if boot switch is kept pressed while the microcontroller is reset using reset switch.

Fig. 2: Circuit to program the microcontroller using the bootloader

On starting/resetting the microcontroller, if the boot reset vector is enabled by setting BOOTRST flag in fuse bit, the program residing in the boot sector is executed first. The boot program can direct the code execution back to the beginning of the flash memory program section on certain pre-specified condition to start the normal code. The boot program monitors port pin PA0 of the microcontroller ATmega16.

Fig. 3: A single-side PCB for programming using the bootloader

Fig. 4: Component layout for the PCB

Fig. 2 shows the circuit to program the microcontroller using the bootloader. The MAX232 (IC1) is used for communication between the PC and the microcontroller to be programmed. The MAX232 converts signals from RS232 serial port into signals suitable for use with TTL-compatible circuits. The MAX232 is a dual driver/receiver and typically converts the RX, TX, CTS and RTS signals. Port pins PD0 and PD1 of the microcontroller (IC2) are used to interface with pins 3 (TXD) and 2 (RXD) of COM port, respectively, through MAX232. A 16MHz crystal along with two 22pF capacitors provides the basic clock frequency to the microcontroller ATmega16.

To derive the power supply for the circuit, the 230V AC mains is stepped down by transformer X1 to deliver a secondary output of 9V, 500 mA. The transformer output is rectified by a full-wave bridge rectifier, filtered by capacitor C8 and regulated by IC 7805 (IC3). Capacitor C9 bypasses the ripples present in the regulated supply. LED1 acts as the power indicator and R2 limits the current through LED1.

An actual-size, single-side PCB for programming using the bootloader is shown in Fig. 3 and its component layout in Fig. 4. Assemble the circuit on a PCB as it minimises time and assembly errors. Carefully assemble the components and double-check for any overlooked error. Use IC bases for the microcontroller and MAX232. Before inserting the ICs, check the supply voltage.

The software is based on ATMEL application note AVR109: Self-Programming. It can be downloaded from ATMEL’s website www.atmel.com. Extract the downloaded zip file to a separate folder on the desktop. Open the preprocessor.xls file and go to ‘defines.h’ tab as shown in Fig. 5. Now edit the highlighted (yellow) grids to the device settings.

Port pin PA0 of the microcontroller is connected to the switch that will be used to enter the programming mode. So the PROGPORT is port A, PROGPIN is pin A, and PROG_NO is PA0. Set the fuse bits for a 16MHz external clock, with the CPU_FREQ setting as 16000000 and baud rate as 19200 (refer Fig. 5).

Compile and link the project file. Your Intel standard hex file will be generated in ‘DebugExe’ folder of the project. Burn the generated hex code into the ATmega16 microcontroller using any programmer as per the fuse bit setting as shown in Fig. 7.

The author is a PhD scholar at IIT, Delhi.