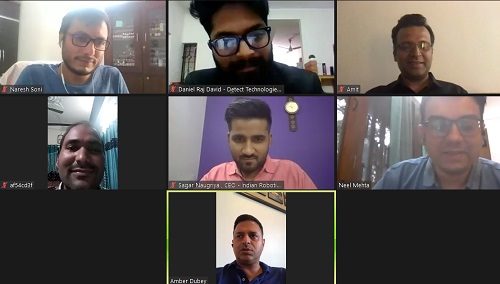 The tech panel in discussion via online

There has been an increase in the number of drones lately, thanks to their user-friendly design and easy availability. However, as challenges are increasing with respect to unanticipated circumstances, these machines can be put to use for carrying out tasks deemed to be dangerous for a human to do so in an efficient and reliable way.

To speak more on this and how latest technologies can be used for the same, six innovators working across the various spheres of technology gathered at the recently held Drone World 2020 webinar hosted by EFY.

The topic of discussion was around the latest technologies available to create cutting edge drones.

With the emergence of autonomous cars, the possibility of developing an autonomous drone has become a reality. With the help of LiDAR, an accuracy can be determined while flying these UAVs in situations that have low-visibility and where other sensors fail.

“When you want to do surveys for highways and power lines, RGB mapping systems doesn’t give data on the ground. But when there is LiDAR, there is a very good chance of getting data. So primarily the interesting thing that comes out of LiDAR is that when you do not have correlation in the imagery data, LiDAR will end up giving you better quality of data. These are not opposite technologies but complement each other,” said Naresh Soni, CEO, Satvig.

At the same time, AI/ML on edge can play a huge role by allowing integration of various sensors  and deploy lightweight electronics in sensitive environments such as hospitals.

“If you want to put AI/ML functionality on drones, you have to understand the network and it’s functionality, and accelerate it to the point where it becomes useful. This applies to making the drones autonomous as well as generate revenue streams for people who want to deploy these drones. To do fail-safe operation, you are going to need sensor fusion,” said  Amit Mate, CEO and founder, GMAC Intelligence.

The event was finally graced by Amber Dubey, Joint Secretary at Ministry of Civil Aviation, Government of India who stressed the importance of collaboration with policy makers and develop drones that are capable of solving the problems faced by Indians before heading out to compete with the world.

“Drone has to be a service. Around 90 to 97 per cent of value will come from the software that is packed into it. Going into the future, the competition will be from top class drones from the world. Anything which is practical and proven in India will work anywhere in the world. So make in India, but compete with the best in the world,” he said.