Liquid Crystal Display or LCD is a flat, electronic device generally used as a screen in televisions, computers, smartphones and display signs for producing still and movable images.

As the name goes, LCD is composed of liquid crystal particles. Liquid crystals generally do not emit light on their own rather they are illuminated by a fluorescent backlight.

Liquid crystals were discovered back in the 1800s and over the following years underwent several modifications that deemed them suitable for a wide variety of applications.

An LCD panel is made of many layers. These consist of a polariser, polarised glass, LCD fluid, conductive connections etc. 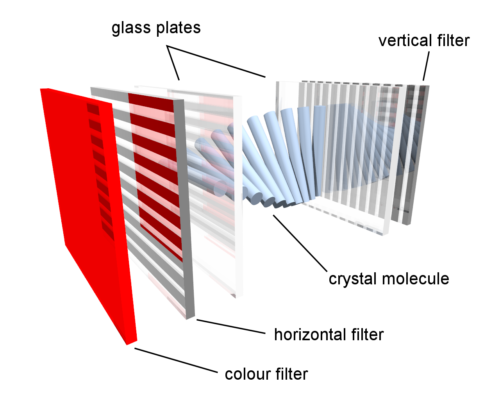 This type of LCD has a mirror layer. When a light ray within an LCD is reflected by the mirror layer, then visible patterns are produced on the LCD.

Here the LCD has a backlight, which passes through the LCD polarised glass to produce visible pattern. But because it uses backlight for working, the images displayed in such LCD types appear very dim when used under bright sunlight.

This LCD type has a reflective mirror layer and a backlight. It uses both outside light and backlight, making it suitable for indoor and outdoor conditions.

LCDs or Liquid Crystal Displays are flat, thin and lightweight, making them more usable and user friendly compared to CRTs. It uses liquid crystals and layers of polarised glass to produce images while consuming less power than CRT.

OLEDs or Organic Light Emitting Displays use a single glass with plastic panel and need no external light to work. Every pixel of this display is an LED light and an image is formed by controlling each of these LEDs. It is much thinner and lighter but expensive as compared to an Liquid Crystal Displays.

QLEDs or Quantum Light Emitting Displays are an advanced form of OLEDs in which nanometre size light particles known as quantum dots produce different colours of light that form an image. The technology helps in creating richer and stunning picture quality.

It has a wide use in digital displays such as:

Check out this video to explore the building of the Liquid Crystal Display.