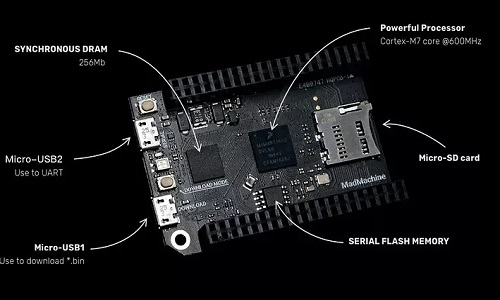 Swift has been a general-purpose programming language that uses a fast approach to ensure safety, performance and develop well-built software design patterns. Its modern, lightweight syntax along with a capability to rectify common programming errors makes it a good choice for expressing complex ideas clearly and concisely. No wonder it is quite preferred for Apple devices and servers, and machine learning applications.

Leveraging such benefits, MadMachine, a community of developers focusing on the usage of Swift language on microcontrollers has launched the SwiftIO, a circuit board that utilises Swift programming language for running various kinds of electronics projects.

The SwiftIO works by sensing the environment to receive inputs from many sensors and subsequently affect its surroundings by controlling lights, motors and other actuators. The Swift framework and MadMachine IDE allow ease of writing the Swift code and downloading it on the board. It runs on Mac OS X, Windows and Linux.

Despite many boards out there having gained popularity amongst electronics hobbyists (such as Arduino, Raspberry Pi), SwiftIO promises equivalent simplicity and power.

Some of the built-in examples include: