With the introduction of artificial intelligence and hybrid technologies, the future of drones is not just limited to taking great live aerial photos and videos, now these can also be used for personal transportation and commercial aviation, and even as food in case of emergency.

Is it not exciting to see a manned drone flying with a person onboard rolling and looping above buildings in mid-air? Yes, this is already happening in some countries. The first commercial drone capable of carrying a human was introduced by a Chinese company in 2016. Since then many companies across the globe have been designing and building various types of manned drones. Some companies have already succeeded in building passenger drones, while many are still into testing with humans onboard.

The future of drones is now not just limited to taking great live aerial photos, images, and videos, but these can also be used for personal transportation and commercial aviation. Imagine your daily commute with no more traffic jams, no traffic lights, no road rages, and no delays. It wasn’t that long ago when all this was just a dream or fiction, but thanks to artificial intelligence (AI) and hybrid technologies, it’s all turning into a reality. This article covers the role of AI in drones, different types of hybrid drones, and their manufacturers. 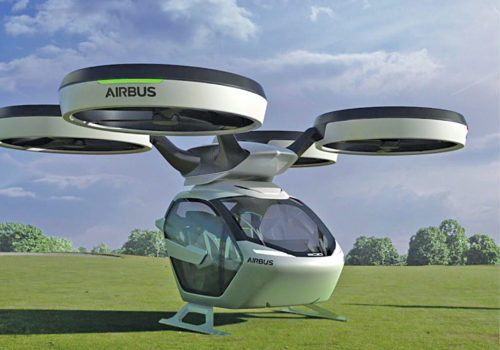 There are different types of drones including conventional drones, autonomous drones, hybrid power drones, hybrid vertical take-off and landing drones, and edible drones. It’s not necessary that all drones require AI technology. But almost every company that deals with autonomous unmanned aerial vehicles (UAVs) or drones claims the use of AI, machine learning or deep learning. Drones often generate large amounts of data. The faster and more accurate the data that drones generate, the faster the images can be evaluated by the system and the better for the drone to fulfill the mission or meet the requirements.

Machine learning algorithms are designed in such a way that they can learn and improve over time when exposed to new data. Since many AI-related tasks for drones are dealing with image processing, the drone must be able to perceive the environment or objects in some way. This process is referred to as machine perception, which is an important part of any autonomous drone. Computer vision is concerned with the automatic extraction, analysis, and understanding of useful information from one or more images. Once the drone has captured raw sensor data, it usually needs to be analysed to extract meaningful information.

Many companies are trying to develop a drone to fly Beyond Visual Line of Sight (BVLOS) for maximum efficiency. For that, motion planning is an important part. The prerequisite for motion planning is usually machine perception that captures the environment. The drone visualises the environment, identifies its surroundings and the distance. Here, deep learning is deployed to detect and recognise objects including humans, vehicles, trees, buildings, and subsequently create a corresponding flight route.

The use of AI technology makes drones smarter and gives ground-level operators a human-like eye-in-the-sky. With AI algorithm, drones can sense their surroundings, which empowers them to map areas, track objects, and provide analytical feedback in real-time. AI technology helps drones increase efficiency and safety.

Hybrid drones are almost similar to what we have seen in hybrid-electric vehicles (HEV) powered by internal combustion engine (ICE) systems and electric propulsion systems. In conventional drones, batteries (often lithium polymer or LiPo) are used as a power source. One of the problems with LiPo battery is that when it gets exhausted after use, it takes long time to charge up. So, you cannot put the drone into a continuous flying mode for longer operations.

One of the solutions to overcome this problem is hybrid technology. You can build a hybrid drone by adding the ICE and DC generator in the conventional drone. DC generator runs with the miniature ICE, which is used for charging the battery. ICEs are usually powered by energy-dense fuels such as gasoline or diesel, or liquids derived from fossils. In most hybrid drones, gasoline is used along with LiPo batteries.

The capabilities of any drone are defined by endurance and range. The endurance for a drone can be described as the total time for which a drone can fly non-stop. It depends on many factors including the capacity of the battery and the motor current, aircraft size, and payload weight.

The range indicates the total distance a drone can fly. The range depends on various factors such as the amount of current the aircraft is producing, battery, radio controller/transmitter range, endurance, flight speed, and aerodynamic performance. Note that some hybrid drones are controlled by radio-controlled transmitters or smartphones, while others are controlled through a computer or laptop. The range of this controlling device is also an important factor for the drone to cover a longer distance.

The advantages of both fuel power and electric power are used in a hybrid drone for increasing the endurance ten times more than a normal drone. When the battery is discharged, it gets charged through the DC generator while the drone is flying. Other benefits of hybrid power include higher payloads, more powerful, and higher reliability.

Hybrid drones will find applications not only in the military but in several existing industries as well for such purpose as personal transportation, air taxis or passenger drones, goods delivery, and inspections. Hybrid drone technology will revolutionise delivery for e-commerce companies like Amazon, Alibaba, eBay, etc.

Hybrid drones are designed with longer endurance and range for outdoor use. For example, Foxtech GAIA 160HY hybrid drone is a hexacopter equipped with a gasoline-electric hybrid power system. It has an onboard 2000W generator that drives high-efficiency motors to ensure a long flight time of about three hours. Besides the internal combustion engine, a 12S lipo battery package is installed onboard to offer emergency back-up power.

The exact scope and future of passenger drones remain uncertain since this technology is new. Advancement in aerial drone technology could result in a rapid proliferation of passenger drones for civilian use like air-taxis and air-ambulance services. Manufacturers of passenger hybrid drones are working to overcome many challenges including noise pollution, short flight times, airspace regulations, safety, and general operations. Some of the popular manufacturers of passenger hybrid drones include Ehang, Volocopter, Workhorse and Top Flight Technologies.

The Ehang 184 was one of the first hybrid drones built for human transportation. Already tested extensively with human passengers, it is one of the most compact passenger drones.

The Volocopter from Germany probably looks like a traditional helicopter. It is one of the few drones to use fibre-optic cables for its communication networks.

It was introduced in 2017 and uses both a gasoline generator and electric battery packs as power backups.

Their Airborg H6 1500 drone has good endurance capabilities and an advanced payload, providing an approximate flying time of over two hours. This drone can reach a maximum speed of 64km per hour while supporting a maximum payload of about 9kg. It can cover a range of 160km, withstanding unfavorable wind conditions up to 56km per hour. It has an advanced autopilot system responsible for calibration and tuning. This drone also consists of a 5000W rated hybrid engine, a tank with a 11.3-litre capacity, and a 16,000mAh LiPo battery.

What is an edible drone?

Don’t be surprised when you hear that someone is eating a drone! That will be perfectly alright under certain circumstances! A special type of unmanned aerial vehicle (UAV) called Pouncer has been developed by Windhorse Aerospace that will be loaded with food, water, and medicine, and would fly independently to its pre-planned destination such as disaster-hit areas. It is a one-way flight drone whose pre-formed shell can be reused by the victims in disaster-hit areas for shelter and the frame can be burnt safely to cook food.

The company is planning to replace the drone structure with special materials like edible food components. That is, it will soon be getting an upgrade that allows some of its body parts to be consumed along with its cargo. Yes, it is possible but with some extra caution because after the coronavirus disease outbreak everything is not the same, especially in areas such as food hygiene and sanitation. Victims need to follow the WHO guidelines including hand hygiene before getting a bite or chunk of the edible drone.

The Pouncer will come in different sizes and capacities. The three-metre-wide drone was designed for hard-to-reach areas during disasters, natural calamities, and conflicts, delivering aid to the victims while saving time, money, and human lives. The drone will be launched from a catapult, balloon or aircraft depending on the area it is trying to reach. Frazer-Nash Consultancy and Windhorse Aerospace are in collaborative partnerships to develop a Pouncer made from a variety of materials to deliver humanitarian edible food aid to remote areas and war-torn locations.