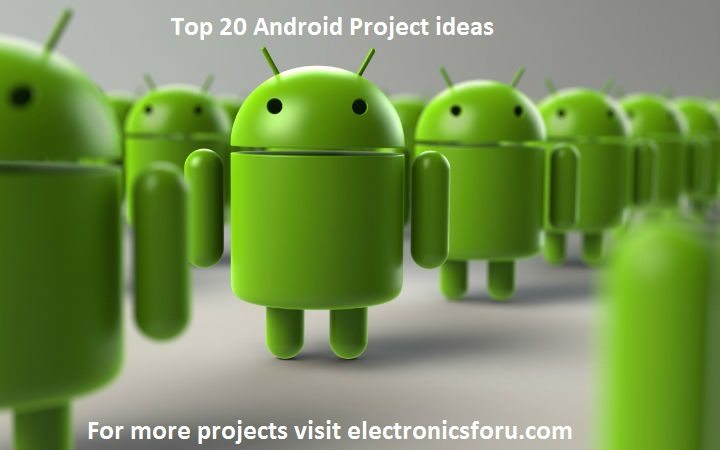 There is a lot of confusion among students when it comes to projects. Nowadays almost everybody is aware of Android and its features. Android projects are a preferable option because of its fast-growing trend. Even though there are a lot of Android projects over the internet, it is either too complex or out of trend. So we have listed out the top 20 Android projects along with their source code which are simple to build and as well as in trend.

This Android-based function generator output is in the range of audio frequency signals (20Hz-20,000Hz), available at the audio output port of cellphones. Most cellphones have 3.5mm audio jack output ports. You can use an audio cable with the audio jack between the cellphone and external devices or any other applications.

More information about this project is available at: Android Smartphone-Based Function Generator

This project is based on the Android app and Arduino Uno using Bluetooth as the wireless communication medium. It is a simple and flexible home automation system with only a few electronic components, without complex soldering. This project is designed to control three appliances, but it can be extended to six or more.

More information about this project is available at: Home Automation Using Arduino Through Android Device

This android app project talks about how RTL-SDR dongles can easily perform the function of an SDR receiver using an Android smartphone with on-the-go (OTG) support.

More information about this project is available at: Software-Defined Radio with Android Smartphones

Program Arduino With Your Android Device

This article explains how you can program an Arduino board using ArduinoDroid app on your Android device like a smartphone or tablet.

More information about this project is available at: Program Arduino With Your Android Device

Presented here is a smart notification system for a door sensor, motion detector, fire alarm and doorbell using Raspberry Pi (RPi) and Pushover app. The project triggers an event through various sensors and sends notifications to your smartphone. These notifications are in real-time.

More information about this project is available at: IoT Based Notification System Using Android App

This project describes how to build a surveillance camera based on Raspberry Pi (Raspi) that records HD video only when something moves in the monitored area. Live feed can be viewed from any Web browser, including one on a mobile phone.

More information about this project is available at: Surveillance Camera Using RaspiCam And Android App

The first android project is this home automation circuit built around an Arduino board, Bluetooth module and a 3-channel relay board. The number of channels depends on the number of appliances you wish to control. The software program for home automation using Android app is written in Arduino programming language called Processing. Arduino is programmed using Arduino IDE software.

More information about this project is available at: Home automation system using Android

This is a robot that can be controlled using an app running on an Android phone. The software for the robot is written in Arduino programming language. The Arduino UNO is programmed using Arduino IDE. The control commands for the robot are sent from the phone using the app.

The circuit presented here can automatically charge a 12V, 7Ah battery, or above. Special features of the charger are as follows. It automatically controls the charging current as per the status of the battery. Battery voltage level, as well as charging status, are indicated on the LCD display.

More details are available at: Interfacing Multiple LCDs With Arduino

This Arduino based visitor alarm is useful for offices, clinics and shops. It alerts you to the entry of a visitor by producing a beep sound every time the door is opened. The alarm automatically switches off after a few seconds.

Interfacing a Laser LED with Arduino

This project turns on and turns off a laser LED after every second. It can also monitor its own supply voltage level. The circuit can be extended for use as an audio-visual alarm system for security applications.

More details are available at: Interfacing a Laser LED with Arduino

DC motor controller by Android is developed to control the speed of the DC motor in both clockwise and anticlockwise direction. For this, DC motor is interfaced to the 8051 microcontroller. A Bluetooth modem is used to receive direction commands and PWM commands.

More details are available at: DC motor control by android

This tutorial will show how to build a simple voice controlled robot that’s easy enough for beginners to make in just a few hours.

More details about this project is available at: Voice controlled Robotic Vehicle

The android application device transmitter acts as a remote control that has the advantage of adequate range, while the receiver end Bluetooth device is fed to the microcontroller to drive DC motors via motor driver IC for necessary work. Remote operation is achieved by any smartphone/tablet etc.

This system makes use of robotic arm as well as robotic vehicle which helps not only to enter an area involving high risk but also to pick whatever object it wants to. The system also includes night vision camera which will not only allow viewing whatever will be recorded in day time but also during night. It sends commands to the receiving circuit mounted on the vehicle through android device application.

More about this is available at: Android Military Spying and Bomb disposal Robot

The system is configured to allow authorized person with a password. A password changing provision is also provided along with it. The password entering feature is providing through remote access. Remote access is provided with the use of an android application that can run on any android device. The app provides an interactive GUI for this system. The system is operated using a microcontroller. An EEPROM is used to store the user password.

More details about this are available at: Android controlled Remote Password Security

The main component in the circuit is a microcontroller. A 4×3 keypad is used to enter the password. The password which is entered is compared with the predefined password. If entered password is correct then the corresponding electrical line is turned ON or OFF. In this project a separate password is provided to each electrical line. Activation and deactivation of the line (circuit breaker) is indicated by the load.

More details about this is available at: Android circuit breaker

The commands sent from the android device can control the movement of the vehicle to move in all directions. The receiver consists of a Bluetooth receiver, Bluetooth decoder, microcontroller, 2 motor drivers and a relay.

This project is used to control AC power to a load by using firing angle control of thyristor. Remote operation is achieved by any smart interface based touch screen operation. Comparator whose output is then fed to the microcontroller.

More details about this are available at: Android Antenna positioning system

Here, we have an advanced hovercraft that uses high rpm motors interfaced with an AVR family microcontroller to achieve desired functionality is used. The motor below hovercraft rotates at a very high RPM that allows it to generate a force enough to make it hover on the surface thus reducing the friction below it to minimum. There is a motor propeller mounted behind it to push the hovercraft in forward direction.

A servo motor is attached to the hovercraft rudder that helps the hovercraft to move in desired directions by bending the air at accurate angles. The android application sends movement commands to the hovercraft circuit. The circuit consists of a Bluetooth receiver to receive and process these commands. The commands received by receiver are now processed by the microcontroller and it then operates all three motors accordingly as desired by the user.

More details are available at: Hovercraft Controlled by Android

Android based ultrasonic distance meter is used to measure the distance of a object. This distance is shown on LCD as well as on Android mobile application. A buzzer is turned on when the distance of object is less than 10 centimeters. The system uses a Bluetooth transmitter, a LCD display and microprocessor which does the operations according to the received command. This project can be used in industries, companies and the like. This project also has applications in robotics.

More about this is available at: Android based Ultrasonic distance meter with Buzzer Indication

This article was first published on 20 December 2016 and was recently updated with new projects on 24 September 2020.