Since its invention in 1897, the cathode ray oscilloscope (CRO) has come a long way in being used as a means to detect the presence of electrons.

It is an integral part of modern-day oscilloscopes that are used for measuring various waveforms of electrical circuits. An X-Y plotter plots an input signal against another signal or against time, enabling the study of waveforms, transients, time-based or frequency-based analysis.

A CRO is a complex device consisting of many parts and components. Therefore, before going in depth into it, let’s first understand the Cathode Ray Tube (CRT).

A CRT is a vacuum tube that acts as the main part through which the functionalities of a CRO is carried out. 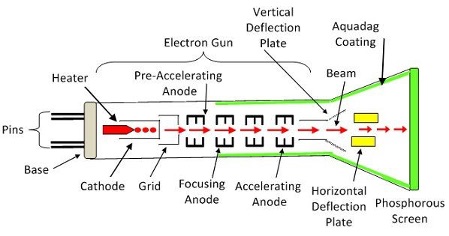 It consists of several parts:

All these components collectively form the electron gun.

The beam then moves towards a set of horizontal and vertical deflection plates. These provide an electric field that acts on the electron beam, rendering them a vertical and horizontal motion.

After passing through this final stage, the electron beam strikes the fluorescent screen to give a glow.

Now that we have learnt the basics of how a CRT works, let’s move onto learning about a CRO.

As mentioned, a CRO is a device that is used for measuring and displaying different forms of electrical signals.

Through this procedure, a CRO displays the applied input signal on the screen of CRT, providing signals in the time domain.