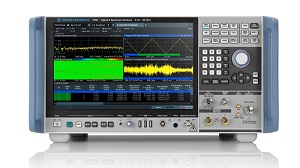 Rohde & Schwarz has launched the new R&S FSW-B8001 that extends the internal analysis bandwidth of the R&S FSW high-end signal and spectrum analyzer to 8.3 GHz. Covering an input frequency range of up to 90 GHz, the instrument provides an unmatched dynamic range and sensitivity, precision and EVM performance.

The extended analysis bandwidth option and dedicated measurement applications, the signal and spectrum analyzer meet current and future test and measurement requirements for ultra-wideband signal analysis. Applications of the R&S FSW include:

The instrument also covers chirp analysis for automotive radar and research on the next generation of wireless communication.

Future satellite systems will also operate with higher frequencies and wider bandwidths as bandwidths are expected to increase to 3 GHz or 5 GHz at frequencies up to 90 GHz, example, for high throughput satellites designed for supporting terabit connectivity. Previous steps for ultra-wideband signal analysis made use of signal and spectrum analyzers as wideband downconverters. The downconverted signals were fed into an oscilloscope, digitized and fed back to the analyzer. The new solution with the R&S FSW, however, offers far higher signal quality and sensitivity in a user-friendly, one-box solution – combined with fully featured and signal analysis capabilities that also offer spectrum analysis functionalities.