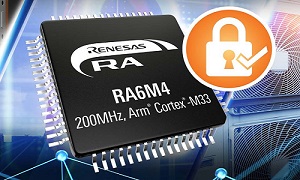 Renesas Electronics Corporation has expanded its RA6 series MCUs with the addition of nine new RA6M4 Group MCUs, increasing the RA Family to 42 MCUs. These 32-bit MCUs boost operating performance up to 200 MHz using the Arm Cortex-M33 core based on Armv8-M architecture with Arm TrustZone technology.

Built on a highly efficient 40nm process, the RA6M4 MCUs drive power consumption down to 99uA/MHz while running the CoreMark algorithm from flash. The MCUs also support fast wakeup times of 30 µs from standby using a high-performance on-chip oscillator. Their high integration up to 1MB code flash memory and 256 KB of SRAM (64 KB with ECC) also make the RA6M4 MCUs well suited for low power and safety applications.

These integrated security features make the RA6M4 MCUs the ideal choice for connected applications and enable customers to realise lower BOM cost and secure element functionality in all their IoT designs.

The RA6M4 with Flexible Software Package (FSP) allows customers to re-use their legacy code and combine it with software from partners across the vast Arm ecosystem to speed implementation of complex connectivity and security functions. The FSP includes FreeRTOS and middleware, offering a premium device-to-cloud option for developers. These out-of-box options can be easily replaced and expanded with any other RTOS or middleware.

The FSP also provides a host of efficiency-enhancing tools for developing projects targeting the RA6M4 MCUs. The e2 studio Integrated Development Environment provides a familiar development cockpit from which the key steps of project creation, module selection and configuration, code development, code generation and debugging are all managed. FSP uses a GUI to simplify the process and dramatically accelerate the development process.

“Delivering on our promise at the launch of the RA MCU Family last October, I’m proud to announce its expansion with the RA6M4 MCUs. They offer customers best-in-class performance and security enhancements built with Arm Cortex-M33 cores that clearly deliver more memory, memory interface expansion, better power efficiency and wake-up time and more connectivity options,” said Roger Wendelken, Senior Vice President of Renesas’ IoT and Infrastructure Business Unit. “We intend to delight our customers who appreciate the higher level of security and IoT connectivity that the RA6M4 MCU Group brings with the confidence and ease of use that only comes by designing with Arm and securing with Arm TrustZone technology.”

“IoT edge and endpoint technologies are opening up new opportunities for developers to build smaller devices, with greater privacy and less dependence on the cloud,” said Dipti Vachani, senior vice president and general manager, Automotive and IoT Line of Business at Arm. “The RA6M4 MCUs move intelligence closer to the data, with Arm TrustZone technology built in to ensure privacy and data integrity, helping securely accelerate the growth of IoT.”

The RA6M4 MCUs are available now from Renesas’ worldwide distributors.