A satellite has to operate in very harsh conditions after launch. It has to function in a vacuum while handling high levels of electromagnetic radiation and fluctuation in temperatures. Therefore it’s crucial to test each satellite properly before it enters space. This article covers the various types of satellites testing and challenges that may occur during the process.

Most people probably never think of how many times satellites affect their lives. But every time you turn on your GPS to find a location, or check the weather forecast, satellites play an essential part. We rely on satellites for so many things in our lives, including communication, navigation, remote sensing, surveillance, and earth observation. Therefore satellites have to be durable and reliable.

A satellite has to operate in very harsh conditions after launch. It has to function in a vacuum while handling high levels of electromagnetic radiation and fluctuation in temperatures. Also, it must survive the extreme vibrations and high acoustic levels during launch. Governments or private companies that spend millions or even billions of dollars a year on satellite technology need to ensure that their investments would be fruitful. That’s why it’s vital to test each satellite properly before it gets launched into space. 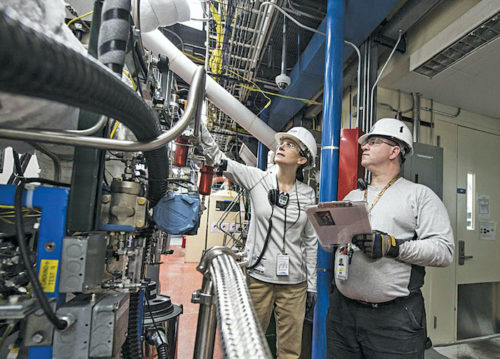 Testing must begin at the initial phase of satellite construction for checking each component’s acceleration during launch, power consumption, RF performance, etc. Common components that need testing include solar panels, antennas, batteries, electrical equipment, fuel cells, and radio equipment for transmitting information from the satellite to the ground station.

As these parts get assembled into larger pieces, they must undergo additional tests. At the final stage, a quality control team must conduct rigorous testing before declaring the satellite ready for flight.

Requirements for satellite testing depend on its construction, design, and payload. Once satellites are in orbit, these are usually beyond the reach of repair. That is why companies that design and test satellites must consider every contingency and examine everything multiple times to avoid any error. Although, if a part of the satellite fails after launch but other components that are providing critical information are still operational, the satellite will remain in use until it has reached the end of its lifecycle.

A crucial part of all satellite testing is the recording of data that will later get analysed to find and repair problems with the satellite. Test throughput and cost of the test are major contributors to these structures. Regular verification of test equipment performance as per specifications ensures repeatable measurements and successful acceptance testing, which can significantly reduce the time and cost of tests.

Satellite testing presents unique challenges. When you test a satellite, you are often testing the one that will eventually go into orbit. Therefore, while the tests need to be meticulous, the testing itself should not damage the satellite in any way.

It costs hundreds of millions of dollars to manufacture and launch a satellite. Currently, satellites are simply decommissioned when these run out of fuel. Satellites are subject to the most challenging technological standards and requirements while operating in space.

Once the satellite is built, no part of it is generally removed for testing. Hence, without being able to see the inside of the satellite, you need to perform all the checks. Thus, sufficiently thorough and accurate preflight testing is required within provided schedules and budgets. The characteristics of satellite communications such as propagation delay, variable channel, and limited bandwidth present challenges for the service providers.

Reducing the cost of tests can significantly reduce the total cost of a satellite program, enabling profitable ventures in new satellite applications. Maintaining instrument and system accuracy and regular checking of the key parameters reduce the overall cost of tests and shorten the program schedule in multiple ways. Following are a few major satellite tests:

In this test, the satellite is kept in a vacuum chamber to check the working of its hardware under various thermal loads. The thermal insulation has to maintain the temperatures of the PCBs and sensors like magnetometer and GPS, and also the battery, in the desired range. The functioning of each PCB, sensor, actuator, battery, uplink, and downlink is thoroughly tested within the extreme space temperature range. Thermal vacuum chambers are used to test satellite operating performance in a space environment (vacuum) with great temperature fluctuations to ensure that thermal control analysis performed during the design phase is accurate.

It helps to ensure successful deployment of satellite antenna in space. For establishing a reliable communication between the ground control station and satellite, antenna deployment is one of the most important tasks. It includes antenna design validation in transmitting and receiving mode to test transmitting/receiving modules and verify switch matrix performance to meet the highest performance requirements in the hazards of space.

GNSS receiver tests can only be conclusive when these are performed under an environment that is close to reality. Thus, GNSS simulation must include proper simulation of satellite orbits, interfering signals, signal propagation characteristics, characteristics of receiver antenna, and receiver environment.

Once a satellite is on its target orbit, several routines need to be performed to ensure optimum performance of the entire chain of satellite communications. Validation, monitoring, and performance test of ground stations are of vital importance for the satellite operator.

Vibration tests are very costly to carry out and are among the most crucial checks to conduct. The collected data from the vibration test allows the analysis of the satellite structure design to meet the vibration requirements. Vibration test is generally done before the thermo-vacuum test by applying various loads on the launch vehicle as follows:

Satellite payload systems must operate reliably in space, providing reliable service for decades of operational life. Additional tests will include measurements to learn each satellite’s exact centre of gravity and mass to ensure its compatibility with its launch vehicle. It also helps to control the orientation when the satellites are in orbit, which can determine how long they will operate in space.

Satellites also need to get tested for shielding against external radio signals. The electromagnetic (EM) interference and compatibility tests are used to understand EM field response produced by the satellite itself under normal operation and to determine the EM interference limit that satellites can tolerate.

A HILS facility is used to test one of the most complex systems onboard, the Attitude and Orbit Control System (AOCS) of satellites in a closed-loop, catering to the stringent requirements of the spacecraft mission. During HILS tests, deficiencies in the spacecraft hardware, software, interfaces, etc, are determined and corrected to achieve flawless operation of AOCS in orbit.

For many years, only governments were involved in the construction and testing of satellites. However, these days large and small private companies are increasingly investing in satellites for commercial purposes like television and radio signals, telecommunications, and even military applications.

NTS provides a network of facilities to conduct the necessary tests, including building gigantic climate chambers, to analyse how a satellite would respond to the vacuum of space or to extreme changes in temperature. It also conducts tests for vibration, solar radiation, dealing with the dust of space or pyroshock, which might occur during the booster separation stage or the satellite separation stage from explosive bolts.

NASA and some other private companies are exploring the ways of satellite servicing, which can make spaceflight more sustainable, affordable, and resilient. It is testing space robots to diagnose, maintain, and extend a spacecraft’s life.

GNSS test solutions from Rohde & Schwarz and some others enable testing subsystems, assemblies, and components to validate the performance of ground station terminals and in-orbit service under well-defined and controlled conditions. All GNSS scenarios are fully customisable and repeatable.

GL Communications provides various test solutions to monitor and test backhaul networks, no matter what type of media, bandwidth, or signalling is over the satellite network.