The solution combines a tiny crypotochip with a radio antenna, which is attached behind a product or a label 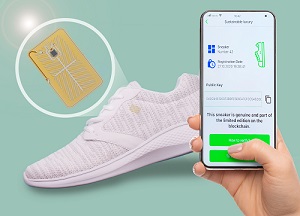 A customisable security solution for blockchain applications has been developed that improves brand and consumer protection. The SECORA Blockchain security solution is integrated into the branded product and gets connected to the blockchain via NFC technology, linking the real with the digital world.

By storing information in the blockchain as individual data blocks that are built on each other, a manufacturer can document the authenticity of the product, feature a limited edition or demonstrate the compliance of the production concerning environmental standards. Consumers in turn can access information stored in the Blockchain via a mobile device and an app from anywhere for a wide range of products such as fashion and footwear to electronics or healthcare.

SECORA Blockchain combines a tiny crypotochip with a radio antenna in a flat housing with a total thickness of max. 300µm. As it is barely visible, it can be attached behind a label or on the product itself. The SECORA Blockchain solution is protected against both hardware and software-based attacks.

Another feature of SECORA Blockchain is that it can encrypt data and signatures with a private key. The product with the integrated chip can thus directly and easily establish a connection to the corresponding blockchain entry with an NFC-enabled mobile device. The signature key, which authenticates the identity of the product, is not generated on the mobile device, but in the cryptochip and is securely stored therein, further securing the application.

Besides origin, any changes to the products, use of original spare parts or changes of ownership of limited collector’s items can also be documented.

However, it is also important here that access to the blockchain is protected to prevent data manipulation regarding the brand and reputation of manufacturers, which can further curb the sale of counterfeit products.