As you all are aware, the transformer is an electric device that converts high voltage to low voltage and vice versa using mutual induction.

It consists of a small number of electrical components. A switching device consisting of transistors or MOSFETs is present at the input to cut-on and cut-off the input voltage of the primary coil. The secondary coil has a diode that restricts the current flow in reverse bias. 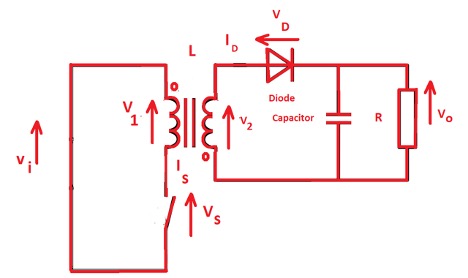 Unlike normal transformers, a flyback transformer is designed in such a way that it can be excited using DC voltage. The primary winding is driven by a switch using DC supply. When the primary coil gets energised, the magnetic flux is transferred to the secondary coil. But since the secondary coil is connected to a diode in reverse bias, the current gets stored. Therefore the next incoming pulse from the primary winding adds on this stored current (i.e the energy stored in the previous pulse). This subsequent addition results in a very high pulse of electricity at the output.

A flyback transformer works by storing energy in the form of a magnetic field during the first half-cycle and then releasing that energy with reverse terminal voltage. The device uses a diode (also known as a flyback diode) to conduct and stop the energy transmission.

Fig. 2: Current when switching on and off

When the primary coil switch is in the on-state then due to inductance, electrical current is built up. The secondary coil connected to the flyback diode in series opposes the current formation. Instead, the energy gets stored in the magnetic core.

Current when switched off

When the primary coil switch is in the off-state, the voltage polarity is reversed due to the magnetic law of induction, causing the diode to shift to forward bias. So now, the secondary coil starts conducting current.