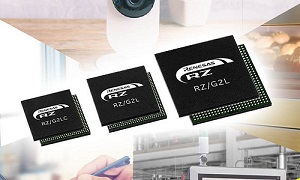 To deliver improved AI processing for a wide range of applications, three new 64-bit microprocessors (MPUs): the RZ/G2L, RZ/G2LC and RZ/G2UL have been introduced. These provide scalability from entry-level to high-end design.

The MPUs also feature the Cortex-M33 core, which makes it possible to perform real-time processing for tasks such as sensor data collection without requiring external microcontrollers (MCUs), reducing the overall system cost.

Key features of the RZ/G2L Group: