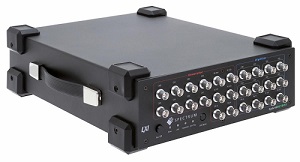 Presenting an innovative instrumentation platform, the hybridNETBOX series that combines a multi-channel arbitrary waveform generator (AWG) and a digitiser in a single portable unit. With a unique capability for simultaneous signal generation and acquisition, the tool is perfect for applications involving stimulus-response or closed-loop type testing.

The series offers two or four AWG channels combined with the same number of digitiser channels. The AWG channels can generate almost any waveshape using high resolution, 16-bit digital to analogue converters (DAC). Output rates and bandwidths vary from either 625 MS/s or 1.25 GS/s and 400 MHz or 600 MHz respectively. At 625 MS/s, the channels can be programmed to output signals with amplitudes up to ±3 V into a 50 Ohm load or ± 6V into high impedance (1 MOhm). At 1.25 GS/s, output signals are ± 2.5 V into 50 Ohm and ±5 V for 1 MOhm.

To help with waveform generation and acquisition, the hybridNETBOX series has a large on-board memory (2 x 2 GSamples) and includes a number of operating modes. For instance, it is possible to output signals using Single-Shot, Loop, FIFO Streaming, Gated Replay and Sequence Replay modes. This flexibility permits the user to generate almost any signal or combination of signals, and develop simple to complex test routines. Similarly, signals can be acquired using Single-Shot, FIFO Streaming, Multiple Recording, Gated Sampling, and ABA (sample rate switching) modes. These can be combined with a variety of flexible trigger modes (Channel, External, Software, Window, Re-Arm, Logic or Delay) to make sure that important events are never missed.

With an ability to create and acquire electronic signals at the same time, hybridNETBOX series is ideal for a wide variety of automated testing applications. For example, they can reproduce and capture echo signals found in radar, sonar, lidar or ultrasound. The hybridNETBOX is also suited to ATE applications where components and subassemblies need to be tested in a fast and automated way. They can also immediately check the functionality and tolerance of DUTs (devices under test) and UUTs (units under test). This powerful testing process can be deployed in a host of applications like bus testing, MIMO communications, circuit verification, robotics, automotive and scientific experiments.

The hybridNETBOX series includes the SBench 6 control software for signal generation, acquisition, display, signal processing, storage and reporting. Data can be acquired with the digitiser part and then be transferred to the AWG for replay. Data sharing with other programs or devices, such as oscilloscopes, is possible using built-in, import/export functions for transferring data in Binary, ASCII or Wave formats. Fully programmable, the hybridNETBOX series comes with drivers for Windows and Linux operating systems, as well as programming examples for C++, LabVIEW, MATLAB, Visual Basic .NET, JAVA, Python and more.

In addition to the digitiser and AWG channels, the front-panel of each hybridNETBOX includes multiple digital I/O connectors, which ease the integration of units into a test system. For example, synchronous marker outputs can be used on the AWG channels to allow precise control of other devices or instruments. Similarly, it is possible to synchronise the unit with other equipment, by applying an external clock and triggers.

“Being portable LXI instruments, they’re easy to integrate into almost any system. Just connect them to a PC or network, via the Gbit Ethernet port, and start generating, acquiring and analysing signals,” said Oliver Rovini, Technical Director at Spectrum Instrumentation.

The hybridNETBOX series with 2+2, 4+4 or 8+8 matched channels and possible speeds from 40 MS/s to 1.25 GS/s is now available from Spectrum Instrumentation.