The power output of these diamond batteries is low as compared to other alternatives. However, their total longevity favours them to become critical components of future electronics manufacturing.

Innovation in the area of batteries has attracted considerable attention from the scientific research community, given the need for greater energy efficiency and low-carbon techniques to supply clean power to sustain the energy evolution. With alternate, sustainable, natural, and renewable sources of energy being sought after, there is a deep interest in a nuclear-powered battery that generates electricity using nuclear waste.

A team of scientists from the University of Bristol in the UK has grown an artificial diamond in the lab. When placed in a radioactive radiation field, it generates a small electrical current. This development is expected to provide solutions for better management of nuclear waste and make clean electricity available.

The scientists hope to recycle waste from decommissioned nuclear power plants. Their work remains confidential, and not much information is available in public. Unlike most of the electricity-generation technologies that use energy to move a magnet through a coil of wire to generate a current, the man-made radioactive diamond produces electric charge simply by placing it near a radioactive source. Carbon-14 or C-14 is created in graphite rods, which are used in power plants to moderate the nuclear reaction.

The radioactive C-14 gets concentrated at the surface of these blocks, from where it is extracted and fused into a diamond to produce a nuclear-powered diamond. This is encapsulated in an artificial diamond to ensure safe containment of the radiation. The lifetime of diamond batteries far exceeds the life of conventional batteries as the half-life of C-14 is as many as 5,730 years. Diamond batteries, which are highly durable, provide charge for thousands of years and serve well as a low-voltage energy source. There are several low-voltage devices like pacemakers, satellites, and space probe components that cannot be easily accessed for replacement of their batteries. 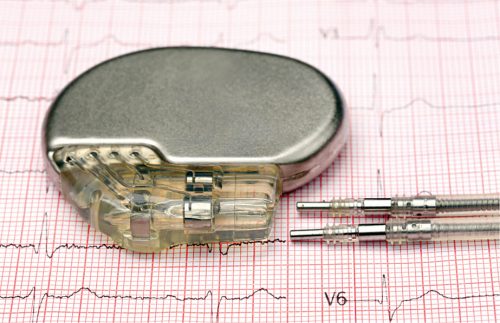 Diamond batteries charge for thousands of years and are apt for devices like pacemakers (Source: www.bhf.org.uk)

One of the serious problems of using nuclear energy in power plants is the management of nuclear waste that remains radioactive for tens of thousands of years. This exciting technology holds great promise as large amounts of nuclear waste can be converted into a usable electricity source.

How it all started?