New Field Area Network module for infrastructure applications, capable of connecting up to 1,000 nodes in a mesh network 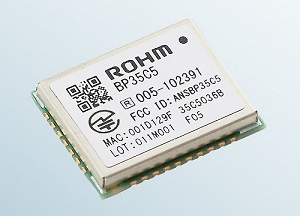 In response to these challenges, the BP35C5, an in-house ultra-small Wi-SUN FAN module has been developed that can connect with up to 1,000 devices (e.g., traffic signals and streetlights), enabling the configuration of a remote wireless management system covering an entire city. The BP35C5 also includes the necessary security functions for carrying out secure communication without needing complicated control.

Wireless Smart Utility Network for Field Area Network (Wi-SUN FAN) is the latest protocol under the Wi-SUN international communication standard, which eliminates the communication costs associated with conventional Low-Power Wide-Area (LPWA) wireless standards. At the same time, Wi-SUN ensures superior reliability through multi-hop networks that automatically switches destinations after signal verification.  As such, this communication technology is expected to see widespread use in large-scale mesh networks for smart cities and smart grids.

Whereas conventional LPWA standards support only star-type networks, Wi-SUN FAN enables the configuration of mesh networks capable of performing multi-hop transmission between relays, while allowing for remote management of terminal-mounted applications via bidirectional communication between relays and terminals. This makes it possible to automatically optimise the hop route between relays in the event of communication failure due to newly constructed buildings or other surrounding obstacles. Unlike other LPWA standards that incur communication costs for each terminal, Wi-SUN FAN can be operated at little to no cost.

Wi-SUN FAN Module Solution consists of BP35C5, an in-house developed ultra-small Wi-SUN FAN wireless communication module. A maximum of 1,000 simultaneous connections can be achieved by installing a Wi-SUN FAN stack for large scale systems in the gateway MCU (20 hops between relays and 64 terminals per relay). Implementing this solution in infrastructure equipment, (i.e., smart meters, traffic signals, and streetlights) achieves a large-scale mesh network topology that can be remotely managed and monitored in real-time.

Also, the Wi-SUN FAN stack stored in the built-in memory of the BP35C5 gives users the option of constructing a small-scale system of up to 16 devices that provides easy control of the module from the MCU gateway.

BP35C5’s built-in security function enables communication encryption and security key updates on the wireless communication module side, making it possible to easily perform secure communication without the need for complicated control. Also, certification under both FCC and ARIB allows for immediate use in the US and Japan. The BP35C5 is offered in the same-size package as the mass-produced BP35C0-J11 (conventional Wi-SUN module), significantly reducing development costs by leveraging existing design assets.

Present in dimensions of 15.0mm × 19.0mm, the BP35C5 module can now be obtained from ROHM Semiconductor and authorised distributors. The BP35C5-T01 evaluation board is also available for purchase.