All models feature a screw terminal interface, along with short circuit, over-current and over-voltage protection 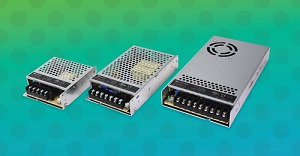 CUI Inc has added three new lines to its VGS family of chassis mount, single-output AC-DC power supplies housed in a compact metal case. The VGS-C, VGS-D, and VGS-W series offer power ratings from 35 to 350 W depending on the series and an operating temperature range of -25 to +70 °C, with most series offering an operating temperature range of -30 to +70 °C. All three series are 62368-1 safety certified with low no-load power consumption for reducing standby power usage in industrial applications.

While most models in the three series are convection cooled, the higher power VGS-350C and VGS-320D both use forced air cooling with a built-in temperature-controlled fan. All models further feature a screw terminal interface, along with short circuit, over-current and over-voltage protection. Terminal cover and conformal coating options are also available.