In the times of the Covid-19 pandemic, it has become important to deploy new technologies and take proactive measures to tackle this situation. Many startups and companies have come up with a host of innovations such as robots and drones to help fight coronavirus and provide services and care to those quarantined or practicing social distancing.

Indian Robotics Solutions, a Delhi-based startup, founded by Sagar Gupta Naugriya and Prashant Pillai, has launched three different products—two drones and a thermal headgear—that have the potential to ease the work of enforcement forces in India. 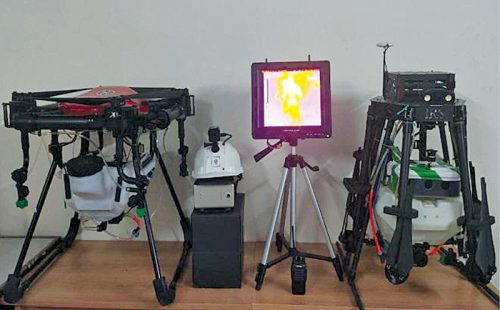 First is a thermal camera, which is used to get thermal imaging or temperature of an individual living in a red zone area. It has Bluetooth-enabled loudspeakers so that directions can be given to individuals who come to their balconies. It also has a night utility camera.

The third product is thermal corona combat headgear (TCCH). It is a helmet that has an attached thermal camera on top of it.

The startup has been busy giving demos of its corona combat drones and headgear to state authorities and police departments since the mid of April 2020. Despite successful POCs (proof of concepts), it has been facing challenges as getting these solutions developed on a commercial scale requires finance.

“According to the preliminary rolling sales plan (RSP) we would require roughly 14-15 crore rupees (approx. US$ 2 million) to make the final product of TCCD and TCCH as well as to manufacture the required quantity as asked by various governments and authorities,” says Prashant.

“Regarding the helmets, talks are going on with the Delhi police. We have also got calls from different states. Concerning the TCCD, we have had interest from four authorities of different states. But due to the lack of enough drones, finances, and manpower, we are unable to provide it to everyone,” he adds.

In addition, some parts, such as thermal cameras and propulsion systems, are not manufactured in India. So, these products need to be imported. These devices come through a legal process that is expensive and time-consuming. The company is currently looking for strategic investors for long term contracts.

Over the course of the last few years, the startup has worked with multiple clients that span across both the government and private sectors. Some other prominent clients of the startup included Sterlite Power, NDMC, GK Minda, and the UP Irrigation Department, to name a few.